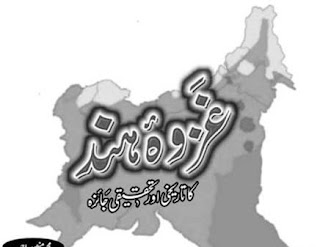 There is lot of talking, discussions and references to Ghazwae-Hind, the Holy war for conquest of India. There are arguments and Hadith references and counter arguments, here the edited counter arguments against this  Holy war By Salman Ali, are presented from his article "Answer to “Myth of Ghazwatulhind. Its up to the reader to draw his own conclusions after reading both arguments.
غزوہ ہند ۔۔ حقیقت یا افسانہ؟》》》》

However it may be kept in view that prophesies are about future events, mentioned in vague terms. The prophecies are interpreted by different scholars at different periods, some applying to events at that particular time while others referring to future or even past events. Since interpretation of prophecies is the human work like "Ijtehad" its likely to err, hence one may not be too much dogmatic about it. If some event is destined to happen it will happen with our without us. Any misinterpretation or misunderstanding may result in to bloodshed of innocents prohibited in Quran. No text be understood in isolation, cherrypicks, the complete teachings in Quran and Hadiths on particular subject are taken in to consideration by the scholars to draw conclusions to develop proper understanding.
Quran lays down the criteria, in 3:7, which could be applied to all holy texts including Hadith:
(The Book He has sent down bears an important Principle.) He it is Who has revealed to you (O Prophet) the Scripture. In it some verses are Literal, while some verses are Allegorical. The verses that pertain to Permanent Values have been presented literally. These verses, MUHKAMAT, are the Essence of the Divine Law. On the other hand, abstract phenomena, historical events, and the World of the Unseen are described in similes, metaphors and allegories for your understanding (MUTASHABIHAT). But those who are given to crookedness in their hearts pursue the allegories and try to give them literal meanings, thus creating dissension. None knows their final meaning (of such as the Essence of God, His Throne, His Book of Decree, the Eternity) but Allah. Those who are well founded in knowledge understand why the allegories have been used and they keep drawing lessons from them (74:31). They proclaim the belief that the entire Book is from their Lord. As the human knowledge evolves, many of the other allegories will unfold their literal meaning (41:53). But only the men and women of understanding will bear this fact in mind. (Each of the verses in the Qur'an is MUHKAM, Absolute Truth and you can understand which ones are to be taken literally and which ones are to be taken allegorically, by the context (11:1), (47:20). And each verse in the Book complements the other (39:23)). [QURAN:3:7]
it must be kept in view that Jihad is to be declared by and Islamic ruler not by individuals and militant groups.
Only Allah knows about future, unseen:
Say, "I possess no power to gain any benefit for myself, nor to evade any harm; except whatever Allah wants. If I had any knowledge of the unseen future I could have amassed an abundance of wealth, and no misfortune would have ever touched me. I am only a warner, and a bearer of good news for the believing nation."[Quran;7;188]

“Say: “None in the heavens and the earth knows the Ghaib (Unseen) except Allaah, nor can they perceive when they shall be resurrected” [al-Naml 27:65]

“And with Him are the keys of the Ghayb (all that is hidden), none knows them but He. And He knows whatever there is in the land and in the sea; not a leaf falls, but He knows it. There is not a grain in the darkness of the earth nor anything fresh or dry, but is written in a Clear Record” [al-An’aam 6:59]

Religion has quite frequently been used as an excuse for military motives. Talking specifically about Islam,  Hadees has been used as a tool to invent excuses for political motivations and military interventions/attacks as and when required .

It is a fact and unfortunate one that Islam along with other religions of the world has a history of being misused and this is one of the unfortunate realities we are living with today.

There has been enormous hue and cry over Ghazwa-tul-Hind for years. This was probably first used by self-styled Jihadi activists in Pakistan for getting public support in Pakistan and raising funds to be used in their attacks in Kashmir with the aim of conquering India and creating what they call dar-ul-Islam. It is very interesting to note that neither Arabs nor the Mujahideen of Afghanistan made use of these ahadees to wage a war against India. Jihadis have a monopoly over Ghazwa-tul-Hind for now.
If Ghazwatulhind and its Ahadees are discovered/produced recently, it will be very easy to nullify their credibility. If a Hadees was authentic, that must have been known to the Muslims before  Jihadis started using it. Is there any historical reference of Ahadees of Ghazwatulhind in the past? Lets explore.

Hafiz Ibn Kathir [Author of Tafseer Ibn Kathir] in his book “Al Bidaya Wan Nihaya” [From the Beginning to End]’s last Volume “Al Nihaya Wal Bidaya” had discussed this Hadith of Ghazwa-e-Hind and in total had given names of multiple Islami military campaigns on Hind. The commentary by Ibn-e-Kathir [Mohaddis] on that “Ghazwa-e-Hind” Hadith is worth reading and he interpreted that Hadith [with Historical References and Health of the Narrators' Chain] and clearly written that all those Islamic armies who launched expedition on Hind were Jihad and he included Mohammad Bin Qasim and Mahmood Bin Subugtagin [Mehmood Ghaznavi] and many other Turk Kings. He included China and Central Asia while interpreting these Hadiths. [Reference: Authenticity of Hadiths anc Narrators get Al Taqreeb by Ibn Hajar Asqalani.

Islamists and right-wing-military-apologists have fallen to the propaganda of Jihadis, when they propagate waging a war against the neighboring country India, finding excuses for ding so through hadees. Zaid Hamid, has been making use of Ghazwa-tul-Hind (6 hadees in total), promoting hatred against Hindus and war hysteria. These hadees are available here.

Ghazwa e Hind and army of Khurasan., Exclusive Talk of ...