Lagos, Nigeria:on the edge of violence


THREE strangers on a beach in Lagos, Nigeria. A scientist with a tumultuous marriage, a rap star trying to find quiet and a military man desperate to contact his family. Each is there searching for solace, each with her or his distinct, complicated life. `Fast and quiet as a whisper,` a huge wave drags them into the water, as if `the ocean had opened its great maw and swallowed` them. But they do not drown. Instead they find themselves alive and unhurt back on the beach after a strange encounter with extraterrestrials, an encounter that changes each of them unequivocally, and sets them on a path to save the city of Lagos, in Nnedi Okorafor`s novel Lagoon.

The strange alien life form falls from the stars and into the sea around Nigeria, cleansing it and giving it new life. The aliens have given the sea creatures whatever it was they have asked for, leaving the lagoon now full of massive spiked octopi, monstrous swordfish and sweet, sweet water that now heals `the worst human illnesses and [will] cause a hundred more illnesses not yet known to mankind.` But they do not want to `rule, colonise, conquer or take.` According to their first ambassador Ayodele, they `just want a home.` Ayodele is the first shapeshifting alien to take human form and talk to the three people on the beach Adaora, Agu and Anthony. `You people call me an alien because I am from space, your outer heaven, beyond,` Ayodele tells them. `I am what you all call an ambassador, the first to come and communicate with you people. I was sent.` It takes a single physical transformation for her to convince the three humans that they must use their wits to navigate the chaos fast descending over Lagos to get Ayodele to the Nigerian president, if she and her people are to help Nigeria become all that it is capable of. 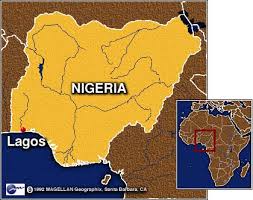 The simplest description of Lagoon would be to call it a classic alien invasion story.

Okorafor uses a number of classic tropes of the genre, often with tongue planted firmly in cheek there is even a `take me to your leader` scene (actual words used, and hilarious) when the Nigerian president asks to see the elders of the alien race. Lagoon`s characters are all brightly painted not even the ones with supporting roles are anything less than full technicolour. From Adaora`s confused and angry husband who suspects his wife is a marine witch, to the priest who decides that the aliens must join his flock, proclaiming that he has `been chosen to bring this creature and all of her kind into the light,` each of Lagoon`s characters is complicated and richly imagined.

As Ayodele says, `You people are very interesting. 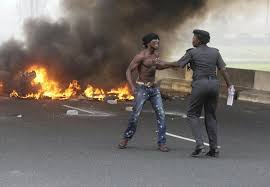 Part of what makes Lagoon an entirely original alien invasion story is the very fact that it is set in Lagos instead of the usual suspects: New York, LA, London, Paris.Lagos often seemed a great deal like Karachi: big, confusing, bursting full of people of every possible sort and always on the edge of violence. It is described as `the city where nothing works yet everything happens,` a concept familiar to Karachiites.

Imagine an alien invasion in such a city, a city entirely accustomed to power breakdowns, lack of clean water, hideous violence and extreme poverty. Reactions to confusion created by an invasion are likely to be very different than in a city where even a basic power cut can cause some form of societal breakdown. It`s even possible that the residents of a city like Lagos (or, I repeat, Karachi) may well have greater survival skills in the face of an alien threat. Of course, it may also mean that xenophobia is more extreme all the better for conflict, drama and action in Lagoon, of course.

Okorafor never holds back, not with her ideas and not with her language. She slips into Nigerian pidgin easily when it is appropriate for her characters, never stopping to explain the vernacular (there is a glossary included for those who need it, but the pidgin isn`t hard to follow and definitely doesn`t take away from the ease with which the dialogue flows). Lagoon also freely shifts perspectives, not just between the main characters but also at times to connect a number of Nigerian myths to the main story. The citywide chaos reaches fever pitch, especially when all sorts of old gods wake once the aliens are in Lagos, including a horrific road monster called the Bone Collector that rises up `like a huge snake-like slab of concrete, the faded yellow stripes still in view` and quite literally swallows dozens of people. 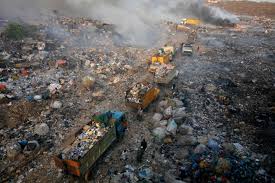 The violence never comes from the aliens though they, in fact, try to stall it. It is an alien in human form who saves theLagosians from the Bone Collector, offering herself to satisfy its immense hunger. `I am everything and I am nothing,` says the alien woman, who is then `pulled into the road`s hot flesh,` until it is finally satisfied, shuddering and stretching with the `relieved sigh of millions of ghosts.

This combination of myth and aliens, of ancient stories and new futures, is what Nnedi Okorafor`s writing is all about. Her last book was a collection of short stories called Kabu Kabu, each story contemporary yet deeply resonating the myth and magic of Nigerian culture. In 2011, she won the British Fantasy Award for best novel for Who Fears Death, a frightening and powerful story set in post-apocalyptic Sudan that wove together both Igbo mythology, conflict and yes, change. In Lagoon, this change comes in a different form: `You are evil, shouts one Lagosian bystander to Ayodele, who replies succinctly, `I am not. I am change.

Lagoon is a first contact, alien invasion story in the best of all possible ways. There is great joy in Okorafor`s writing, a clear enjoyment of both the genre and the boundaries she constantly pushes at. First contact science fiction stories are often heavy, sobering tales of politics and economics, traditionally exploring xenophobia, and while Lagoon is no less an intelligent comment on all of the above, it is never heavy-handed with morality. Okorafor doesn`t judge people for their lifestyle choices and there are all sorts of lifestyles represented in Lagoon but she does judge the corruption and violence that has infiltrated Nigeria in this case a place representative of so many other developing countries. Lagoon is both socio-politically and environmentally aware, without ever letting go of the strongmythological narratives that form the core of Nigerian culture. Okorafor may be looking to the future for the city she loves, but she knows its strength lies in its ancient soul.
by Mahvesh Murad, Dawn