Militancy thrives in Pakistan; How to end it ! 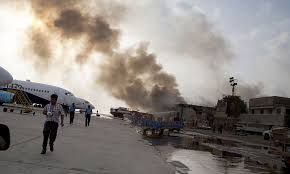 THE attack on Karachi airport was something that the government had been trying to postpone through dialogue with the militants. It could have been postponed but not avoided.

The enemy has territory in the tribal areas and can disappear into the border region with Afghanistan. It has hundreds of mosques and madressahs across the country where it can hide and recuperate and from where it can launch attacks at will.

It can broadcast its message free of cost, courtesy our national media, and boast about its deeds and terrorise the country through threats. In fact, it seems the media is as pleased to terrorise the public as the terrorist.

There is no doubt that an overwhelming majority in the country is not with the Taliban, even in the tribal areas, and for bringing back peace, both leaders and the population will have to bite the bullet. If it is only the government that refrains from following the path of least resistance, extremism would increase as the population may accept a radical version of Islam, if its proponents ensure them and their children safety. 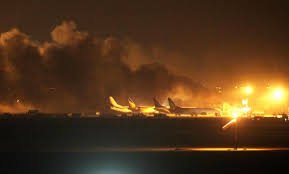 We will become a violent nation with beautiful roads.
Our leaders have their game plan all worked out. They are in the country now. But as soon as it becomes too dangerous here, they will use their fallback position to leave for freedom and luxury in foreign lands, where their mansions and luxury cars await them.

All our rulers can think of are high-visibility projects, which they will leave behind as their legacy. There is apparently no time and money to focus on education and health issues, but plenty of both for roads and metro buses. We are already ahead of our neighbour India and Bangladesh where our road infrastructure is concerned, but we are way behind in essentials such as education, health and population control. That does not rattle our rulers. We are well on our way to becoming an illiterate, violent and extremist nation with beautiful roads.

The policy of keeping dialogue on the table and hitting back when hit has been followed with success. There is no need to abandon it, even with the Karachi airport provocation. The government can still talk of dialogue, while hitting back firmly where necessary. Declaring an all-out operation raises too many hopes, displaces too many people, disempowers the civil administration, and ends up with the army not being able to leave the area.

The option of dialogue continues to create fissures in the ragtag ranks of the enemy, where unhappy factions can come over to the government’s side to get even with the adversary, as in the case of the Sajna group.

Concrete steps can still be taken to pull us back from the brink.

Firstly, the political leadership should realise that terrorism is the main problem of the country, far more than electricity, the economy or infrastructure. These can only be present in a country that’s there. So this year should be focused on eradicating terrorism. All financial resources, all manpower resources, all newspaper ads should be focused on controlling terrorism and not on new roads and metro projects.

Secondly, there should be a ban on publishing or broadcasting any statement to do with the terrorists that glorifies them.

Thirdly while the government should be clear about its strategy it should not be announced.

Fourthly, a strategy for regulating madressah and mosque activity is needed. Madressahs and mosques need to be monitored closely by the various intelligence agencies, making it obligatory for them to be absolutely transparent with the administration. Enough laws exist but if a new law is necessary, it should be there on the books. Mosques and madressahs cannot be allowed to be used against the state. It would be better to face the reaction now, rather than when it becomes impossible to do so.

Fifthly, a strategy for the tribal areas should be prepared to bring back the old empowered administration. If the powers of the political agent need to be enhanced or decreased, let it be done through local consultation and the process of holding jirgas. The army needs to swallow its command instinct for a while and play its part in providing an enabling environment for civil officers to be able to regain their lost self-confidence and esteem .

Sixthly, a strategy should be formulated to strictly monitor all educational institutions in the country, to see that no matter, faith-based or otherwise, that can create a destructive, biased or angry Pakistani, is taught at the educational institutions. Let the rulers show their passion to ensure that Pakistanis are taught to forge themselves into a harmonious nation.

True, this sounds like a tall order, but if we don’t act immediately, we will go back to the dark ages, even if the rulers are able to supply us with ample and free electricity.

By Tasneem Noorani, www.dawn.com , The writer is a former federal secretary interior.
tasneem.m.noorani@gmail.com